Learning from Each Other – Global Analysis of the Coronavirus Pandemic

The past few months have been one of the most difficult in recent times, not just because of the Covid-19 infections but also because of the ripple effect it has caused across different economies and sectors. As we prepare for one of the worst pandemics that the modern world has seen, not all countries have been responding to it the same way. There is a lot of learning we can take from each other as we battle this crisis together. It is said “In times of crisis, the wise build bridges, while the foolish build barriers”. We are presenting an analysis of the current spread of Covid infections, recoveries, and the mortality rates.

Countries (with minimum 1000 cases) which have the most Covid-19 cases per million population: 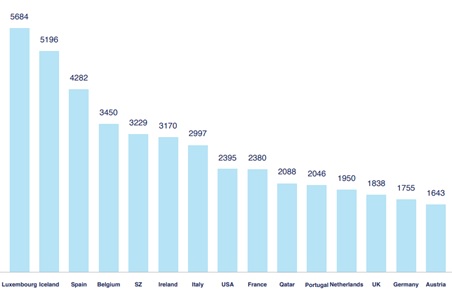 Countries (with minimum 1000 cases) which have had the most deaths per million population: 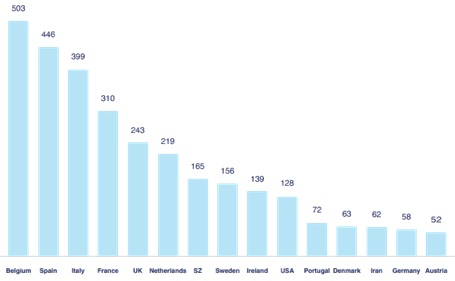 As we can see above, the mortality rate in Belgium is very high and it has had the most deaths per million population (503), which is even higher than Spain, Italy and France. Again, 13 of the 15 worst hit countries are from Europe, the other two being Iran and USA. In India, the deaths per million is at 0.4. 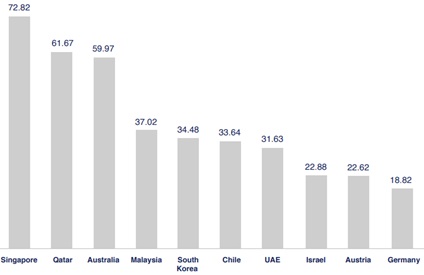 In Europe, Austria and Germany are doing far better than other countries in keeping the mortality rate in check. Also, Australia, Singapore, Qatar and South Korea are reaping benefits of the early actions taken by their respective governments in controlling the pandemic spread.

We also see countries where the recovery rate is not so good. Following countries (with min 5K cases) are doing worst in terms of Patients Recovered per death recorded due to the outbreak 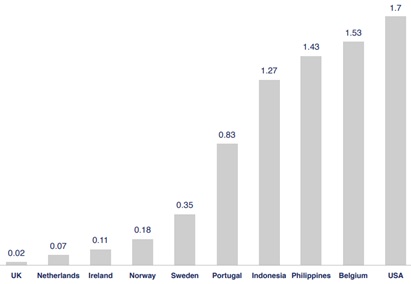 If we look at UK, the story is very different, and the impact is extremely bad when compared to other countries and it has the worst recovery/mortality ratio. In addition to the European cluster of countries, we can also see another cluster in Indonesia and Philippines with a recovery ratio of just 1.27 and 1.43 respectively.

We see a clear demarcation where certain countries are doing much better than others, a major reason being early actions taken by their respective governments. In India, the Recovery/Death ratio stands at 5.53. 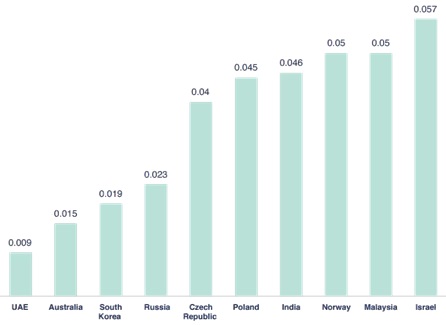 UAE, Australia, Russia and S. Korea have done really well when it comes to proactively mass testing their people. India’s efforts are commendable considering the population and task at hand. This signifies the fact that mass transmission has not yet happened in these countries and the spread of the disease can be controlled in the coming weeks.

On the contrary, following is the list of countries (with min 5K cases) with most COVID-19 positives per test done: 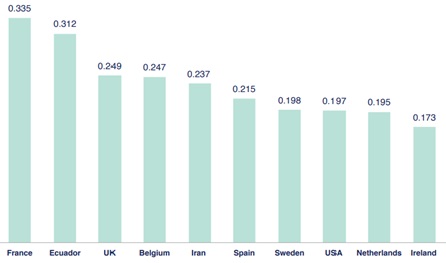 As we are aware, France (0.335), UK (0.249) and Spain (0.215) are hit hard by the outbreak. Looking at the ratio of positives to tests, almost 1/3 of the test results in France, almost 1/4 in UK and Spain have been positive, which when coupled with the magnitude of patients affected is a big problem. Perhaps many more cases may crop up in the days to come as testing increases in Europe and South America.

Also, looking at the total tests done, we see many countries have been proactive and testing on a mass scale to make sure the positively affected are quarantined timely. Following is a list of countries with most tests done: 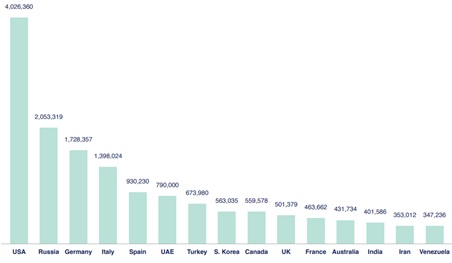 Russia, Germany, S. Korea have been proactive in testing, an important consideration that helped them keep the mortality low.

Similarly, Australia and UAE have been very proactive and even Venezuela has conducted more than 300,000 tests despite having a very small percentage of positive cases.

When we look at the sheer numbers, South Korea and UAE have done more tests than both UK and France. Testing in Spain increased rapidly in the last 10 days (almost doubled), but still a long way to go. We can also see that some of the countries outside Europe have handled the crisis much better. For instance, Australia has 15-20% of the number of cases of Belgium but has tested 150% more people than tested by Belgium.

In a similar manner, we see Venezuela which has 285 positive cases but has tested more than twice the number of tests done by Netherlands and Belgium; both countries having more than 30,000 positive cases.

As the days go by and we see the growth in number of cases globally, one thing becomes very clear: Early testing and isolation at a large scale holds a major key and is the differentiator between some countries which are able to cope with the pandemic better than the others.

As we hope for the pandemic to be over soon, we must take learnings from each other, and follow the path that some of the countries have followed to flatten the curve effectively. These are challenging times, but we must not forget that there is light at the end of the tunnel. As Paulo Coelho once said:

“Life always waits for some crisis to occur before revealing itself at its most brilliant.”